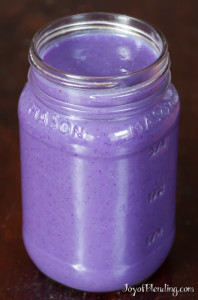 As I mentioned before in my bright orange smoothie post, even though I don’t usually care what a smoothie looks like, sometimes it’s nice to make a strong visual impression. In this case I was curious if I could make a naturally blue colored smoothie.* Blue foods are quite rare, but I had an idea that I could turn red cabbage blue by shifting its pH. Red cabbage (aka purple cabbage) contains anthocyanins that are blue at basic pH. I did a little research into the pH of various foods, and unfortunately I quickly found that most foods range from slightly acidic to moderately acidic. I found a few candidates, but as you can see from the picture, I did not succeed in getting a naturally blue palatable smoothie. I did however discover a surprisingly tasty combination: cabbage and corn! 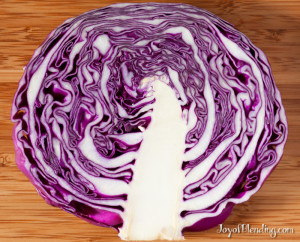 The two plausible slightly basic candidates I found from that list of food pH values were egg whites and frozen corn. I had never put raw eggs in a smoothie before, but I’ve heard of people who do, and a little searching found that, as weird as it sounds, some people enjoy corn smoothies. In terms of colors, the corn did not turn the cabbage blue at all. At high concentration egg whites did actually turn it blue, but for my classic 16-oz smoothie I would have probably needed nearly a dozen egg whites, which seemed excessive. I also tried baking soda on a bit of it, which worked great for color, but did not taste good. So for now, the naturally blue smoothie is still elusive, but the result was a vibrant purple corn and red cabbage smoothie that tastes surprisingly good.

Makes two small servings or one large one. Blend on high until smooth and enjoy! You can change-up the taste with salt and pepper if you like, and as always, you can make it thinner or thicker by adding more water/ice or cabbage/corn respectively.

This also inspired me to realize that you could use red cabbage with berry smoothies. A lot of people like to make “green smoothies,” where you blend greens with fruit, but if you blend a lot of greens with berries you often get an unaesthetic brownish color. If you substitute red cabbage for greens in a berry smoothie you’ll get a brilliant purple color. Cabbage is also cheaper and lasts longer than classic greens. (Cabbage is nutritionally similar to greens because it’s in fact just a different variety of the same species as kale, collard greens, and broccoli.)

I also played around a bit with mixing some less palatable pH mixtures with the smoothie:

I’ve heard that red cabbage can turn blue when you cook it, but when I tried microwaving a piece in water, it didn’t turn color for me. If anyone has experience with what cooking conditions turn cabbage blue, I’d be curious to hear. It may have to do with factors out of my control like pH of the tap water, and I also read that the pH of the soil cabbage is grown in can affect the color of the plant. I’ll post an update if I succeed in getting a blue smoothie with cooked cabbage.

* I was inspired by a YouTube video of a blueberry smoothie that is strikingly blue. I don’t actually recommend that smoothie because it has a ton of added sugar, and it’s misleading—he gives a recipe and makes the smoothie on-camera, but then off-camera adds blue food coloring without mentioning it. He later admitted in the comments that he added food coloring. Despite their name and the color of their outside, blended blueberries come out purple. Go back up