I recently discovered that cinnamon can be a great smoothie ingredient, though a little googling shows I’m not the first to have this idea. It can really take the flavor up a notch, and it’s nice for variety. So far I’ve been putting it in berry smoothies similar to this one, but I bet it would go well in a range of other smoothies as well. I made a particularly decadent smoothie by my standards because I was out of vegetables. So this one was just a persimmon, berries, and chia seeds. 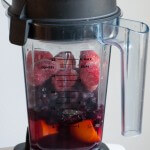 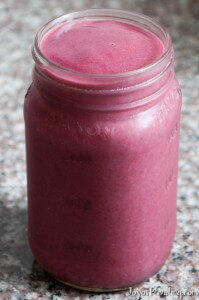 Makes ~20 oz. Remember that as usual these quantities are highly flexible, and this is just a starting point. My cinnamon is on the strong side, so I didn’t want it to overpower the berries; you could easily add more if you wanted to maximize the cinnamon flavor. The persimmon is also not necessary; you could easily substitute another fruit. We’re still riding the wave of persimmon season here.

On a different day I made essentially the same recipe into a frozen yogurt by adding 1 cup of yogurt and 5 ice cubes instead of the water and chia seeds. I’ll have to post some pictures of frozen yogurt blends in the future.

One other thing about cinnamon is that you can grind it in the Vitamix, which I recently tried for the first time. I have to say I’m not sure it was worth it: clean up took a while, and the result was not quite as consistently fine as pre-ground. I ground 1.5 oz (weight), which seemed close to the minimum to get decent circulation, and I used the dry blade. It’s possible that it would work better if you ground more, but more than 1.5 oz at a time seems a bit excessive. I was not able to get all of the cinnamon residue out of the container, but it’s subsequently worked it’s way out in other blends. It did smell pretty awesome though. I could see it being worthwhile if you were in a place where buying fresh cinnamon was inconvenient, or if you were mail-ordering a special variety of cinnamon, since cinnamon will keep longer as sticks than as powder.