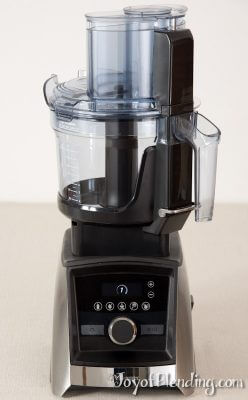 Vitamix just released a Food Processor Attachment for their Smart Blenders (Ascent and Venturist Series). In my opinion, this is their most interesting new product since I started this site in 2012, and maybe even since they released the predecessor of the 5200 back in the early 90s. Vitamix sent one to me for review, and I’m excited to share my thoughts. (My opinions here are fully independent from Vitamix, though I do receive a commission if you order via one of my links.)

You may be wondering, wait, can’t a Vitamix already food process? Isn’t it more than a blender? It’s true that you can chop foods in a Vitamix without liquefying them, but a food processor gives more control. The sharp blades of a food processor do more slicing and less crushing than the duller blades of a standard Vitamix. I’ve previously written about Vitamix vs. Food Processors.

Now we can have an actual food processor on a Vitamix base! It doesn’t come cheap, but given Vitamix’s high standards of quality, that’s not surprising. Considering that Vitamix’s standard containers cost $129 to $159, the Food Processor Attachment’s $199 pricetag is right about where I would expect it.

Given that you can purchase a whole mid-range food processor for this price, why would someone buy just the attachment from Vitamix? This is clearly for people who already have a Vitamix base. Most people keep their Vitamix out on the counter, and most store their food processor away in a cabinet. By fitting on the same Vitamix base, this will be more convenient to use. As expected, the build quality feels solid. And Vitamix’s warranty service is the best I know of. If you ever have to send something in for repair, they pay for shipping both ways.

In transforming a blender base into a food processor base, Vitamix had to solve two challenges: blade speed and safety interlocks. Food processors spin slower than blenders, so Vitamix created a gearing system that sits hidden inside the bottom of the food processor attachment. It gears down the speed by approximately seven-fold. Vitamix solved the safety challenge with their self-detect technology, which uses NFC tags that activate when multiple parts come together. This means that the motor will only spin the food processor blades if the lid is fully in place.

What comes in the box 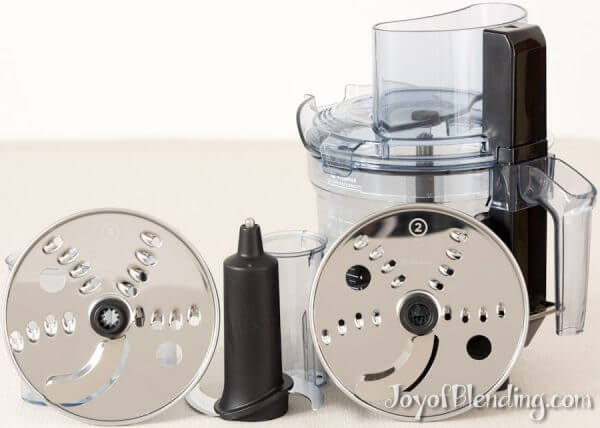 They designed a “storage mode” where you invert the lid and put the pusher chute around the blade spindle. Then the storage case for the slicing and shredding discs snaps onto the inverted lid. This seems pretty clever and it’s a nice way to keep everything together in as compact a form as possible: 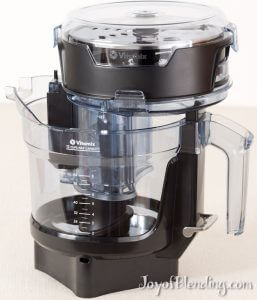 In storage mode it is 12.5 inches tall, and assembled with pushers in the feed chute it’s almost 13 inches tall.

The S-blade is for general chopping and dough kneading.

The small chute lets you add skinnier things like carrots while holding them upright, while the larger chute handles wider items. You can add liquid with the pusher in place. There’s a small hole in the bottom of the pusher that is designed to steadily stream in oil for making emulsions. Max diameter for items in small chute: 2¼ in; max diameter for round items in large chute: 2½ in; max length for horizontal items in large chute: ~5 in. 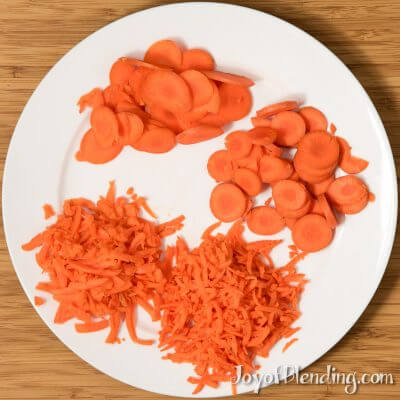 Some of the carrot got sliced on more of a diagonal. I probably could have gotten them all perpendicular by feeding multiple carrots at once so that they couldn’t tilt in the chute.

I chopped some mint with the s-blade, and then used the small shredder to grate carrots and beets. It goes super fast, and I quickly had two pounds of salad: 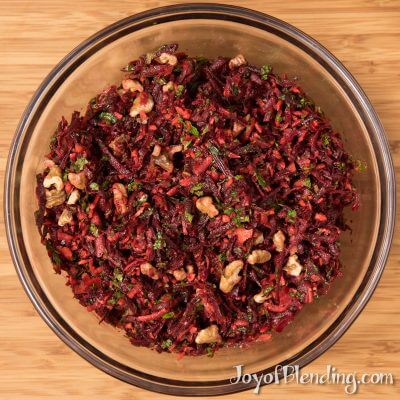 I also made some pico de gallo. For this one, I did a side-by-side comparison with the standard 64-oz container. Before: 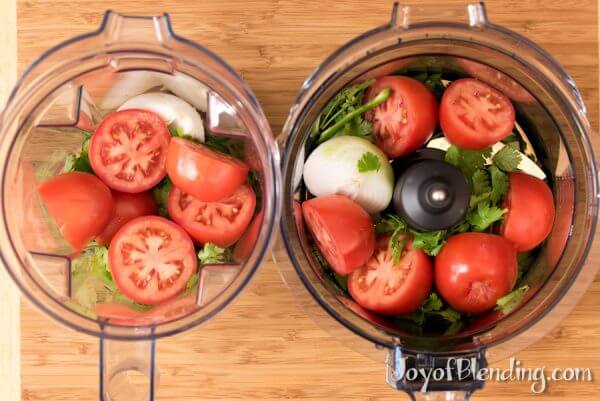 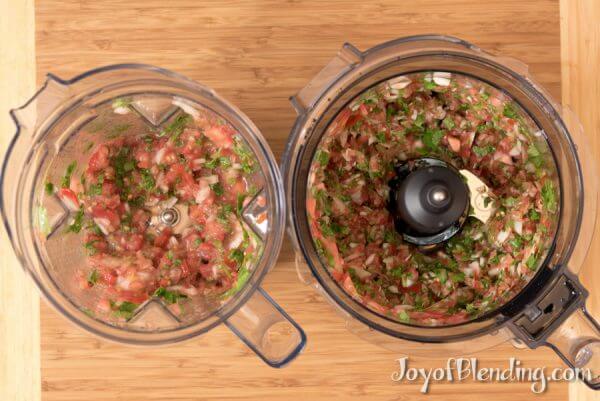 As expected, the food processor blade does more slicing. This results in a more even chop, and it also releases less liquid from the tomatoes. The onion flavor was also slightly milder, presumably because it had not been bashed as much.

Here’s a Roma tomato sliced with the thick slicing disc: 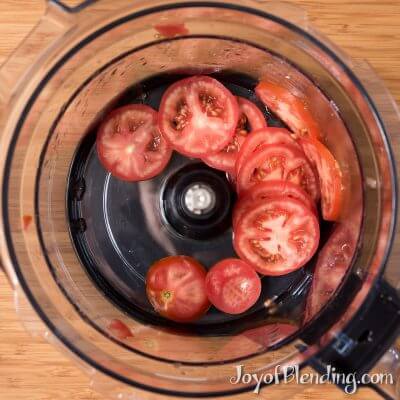 The slices are not super thick! The tomato slices here measured about 0.2 in. I’ve heard that some food processors struggle with making nice slices of a tomato, but the Vitamix slicing disc is sharp enough that it makes clean perfect slices. The only limitation I can think of is size of the feed chutes means that you won’t be able to slice larger whole tomatoes like this. The small chute is the perfect size for Roma tomatoes. 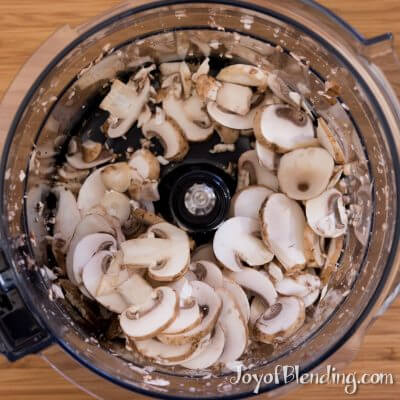 And here it is grating cheese: 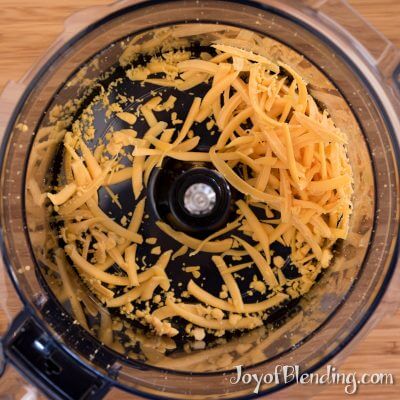 Some food processors leave chunks of unprocessed food above the disc, but that was not a problem with this design. Here’s how much cheese was above the disk: 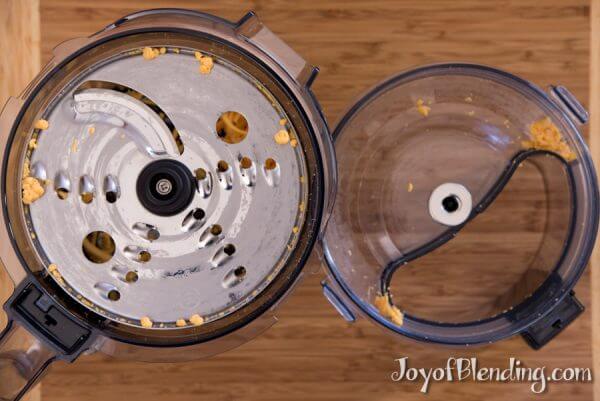 In my testing, the Self Detect worked every time. There was one time where I forgot to snap both sides of the lid on, and it wouldn’t start until I snapped on the other side. The lid uses the same type of latches as the other Ascent containers, so you get two audible clicks when it snaps into place. Similarly, the container snaps onto the gearing base with an audible click.

I’ve always said that if you have the right tool (a long narrow spatula) getting blends out of the standard Vitamix containers works pretty well. But it frustrates many people. The Food Processor container has a flat bottom and straight sides, so scraping it out is super easy, especially since there’s no blades to work around. (This silicone spatula worked well.)

I did once forget to lift the s-blade out of the container before pouring out the contents and the blade fell out. I’m so used to Vitamix blades being firmly attached to the container that I didn’t think about it. It was no problem, but the blade is sharp, so it’s best to not drop it on yourself!

The motor will not operate without the large pusher at least partially engaged. This is to prevent you from sticking your hand into the cutting disc. The small feed chute is small enough that you can’t fit your hand through, and you can feed in long carrots without having to have the small pusher partially engaged.

One slightly weird thing is that the speed dial does not control the speed of the Food Processor Attachment. It only goes to a single speed, regardless of the speed setting. I guess they must have decided that there’s no reason to use other speeds. If your machine has preset settings, they’re all inactivated except for the clean cycle on the A3500. The pulse button does work.

I’ve heard some sources say that a dishwasher can dull blades over time, so I’m tempted to not put the blades in a dishwasher, even though Vitamix says they’re dishwasher-safe.

Use on other Vitamix machines

The Food Processor Attachment (FPA) is only intended for use on Ascent or Venturist models. Putting it on any other machine will bypass the safety features. I do not think that this is a case of Vitamix trying to force users to ugrade for the sake of upgrading. (Vitamix just recently released a different new product that is compatible on both smart and non-smart models: the stainless steel container.) All food processors have some sort of safety interlock, and I can’t think of any way that it would be possible to add that onto a non-smart Vitamix.

If you want to use the FPA, I recommend giving your current Vitamix to someone who would appreciate it and upgrading to an Ascent or Venturist machine. (Follow that Venturist link and add to your cart to activate a special deal of $100 off.)