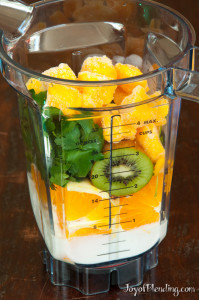 This smoothie has totally different flavors from the ones I’ve previously described, which are often based on berries or ginger. Sourness from the kiwi complements the mango, and cilantro gives it a surprisingly delicious extra kick.

Blend on high until smooth. Makes a single ~16–20-oz serving.

I haven’t been peeling the kiwi because the Vitamix has no problem with obliterating the skin, it adds a little nutritional value, it’s easier, and I think it tastes fine. The skin has a slight sharp flavor, so if you want a maximally mellow smoothie you could peel it (if you’re going to, it’s easiest to cut it in half and scoop the flesh out with a spoon).

This smoothie is also good with coconut milk instead of yogurt. You could use fresh mango, but frozen is really convenient, especially for making a single serving like this. (I’ve been getting frozen mango from Trader Joe’s.) You could also boost the nutritional content by adding a carrot, chia seeds, or some other greens like spinach or kale.

Thanks to my mom and commenter Donna for encouraging me to use cilantro in fruit smoothies. It works surprisingly well! 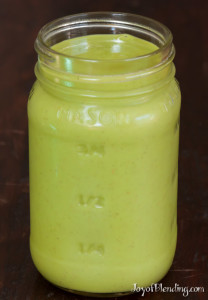