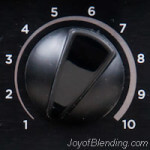 Everyone knows that Vitamix blenders spin fast, but what are the actual Vitamix RPM speeds? And are there differences between the speeds of Classic and Next Generation Vitamix motors? In this post I answer these questions by measuring Vitamix RPM speeds. (For details about which models are Classic and Next Generation see my Vitamix comparison page.)

This is a bit different from my usual posts, and it is not directly related to how well the blenders blend food. However, I hope blending enthusiasts will find it interesting, and there are a few lessons that may help you better understand your blender.

I came up with two ways of measuring blender speed at home. If you’re interested, you can read the linked detailed account of my methods. Briefly, the first method uses an adjustable flashing light to “freeze” the motion of the blades, and the second uses sound recordings to analyze the pitch of the sound that the blender makes. Satisfyingly, the results of the two methods are consistent. The methods use widely available and relatively inexpensive materials, so most anyone with an interest could perform them at home.

Before launching into results, let’s briefly review the relevant units. Blender speed is typically described in RPM (revolutions per minute) or MPH (miles per hour). MPH may seem like a weird thing to talk about for a blender that sits on your counter, but it just refers to the speed of the tips of the blade. MPH is relevant because it depends on the blade length—a longer blade spinning at the same RPM as a shorter blade will mix the contents more vigorously with a higher MPH because the blade tips travel further in each revolution. Converting between RPM and MPH is straightforward if we know the blade length. (10,000 RPM is ~90 MPH for a 3” blade or ~120 MPH for a 4” blade.)

I tested a Vitamix Creations II, a 5200, a Pro 500, a 7500, and a Pro 750. The Creations II and 5200 are essentially the same model (see my Vitamix comparison page for a table with all of the equivalent models). The following speeds are for blades in an empty container with the blender set to either the minimum or maximum speed.

I did not do a rigorous error analysis, but I’m relatively confident that these measurements are accurate to ~500 RPM and ~5 MPH.

Meanwhile, the 5200 is often claimed to spin at up to 37,000 RPM, which is a major overstatement compared to my measurements. I looked a bit further and found some references describe the 37,000 RPM as the “bare motor speed.” Without a container the maximum speed of the 5200 increased to 31,000 RPM—closer to 37,000, but still significantly less. I suspect that “bare motor speed” refers to the maximum speed of the motor completely unattached to any blender parts. (There is a cooling fan mounted on the motor shaft inside the blender, which slows it down from the bare-motor speed.) I believe 37,000 RPM is based on a real property of the motor, but Vitamix blades do not spin at 37,000 RPM.

As far as real-life usage goes, the minimum speed of the Pro 500, 7500, and Pro 750 blenders is noticeably faster than that of the 5200, but it is not usually an issue for blending. When I want my 7500 to go slower (for example when using the bubble removal trick on a thin blend) I put it on the lowest speed and pulse. That said, all things being equal I would choose the wider speed range. I don’t know why Vitamix increased the minimum speed on these models.

So far we’ve only looked at an empty blender spinning at the minimum and maximum speeds. Something interesting happens when we look at the intermediate speeds and also give the motor more resistance by blending something. The first thing I did was fill a Classic (3” blade) 64-oz container with 8 cups of water. 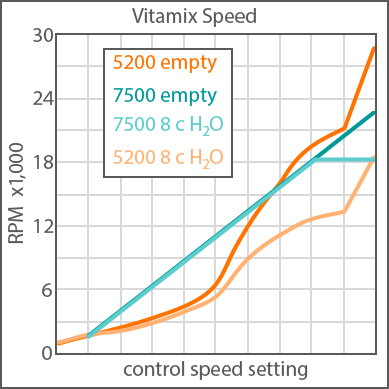 This plot shows the following: 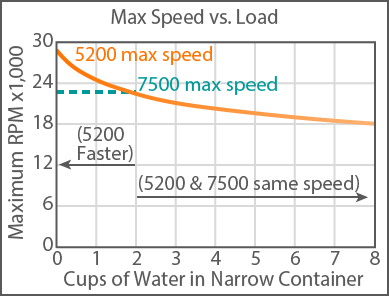 Classic vs. Next Generation at Heavy Load

You might wonder, as I did, if the maximum speed of the 5200 and 7500 blenders continue to be the same at higher loads (thicker blends). To test this I blended 3.5 cups of hummus in a narrow container and swapped the container back and forth between the 5200 and 7500. I was surprised to find that their maximum speeds continued to be equal (12,000 RPM) in this case of a heavy load. I also measured the electric power draw of the two machines at this load using a Kill-A-Watt device and they were the same: 1600 watts.

If the motors of the 5200 and 7500 perform the same at maximum speed at all significant loads, why does Vitamix say that you shouldn’t use the 4” blade on the 5200? Aside from wanting to sell new machines, the one reason I can come up with is that the 7500 base has a redesigned airflow design that likely allows better cooling. (This updated design also muffles the sound slightly better.) One of the limiting factors of this type of motor (universal motor) is that it heats up at heavy loads. This is why Vitamix machines have a thermal protection override that will switch off the machine if it gets too hot. (The override ensures that you won’t burn up the motor by overloading it, but for maximum life, it’s best to run the motor as cool as possible.) 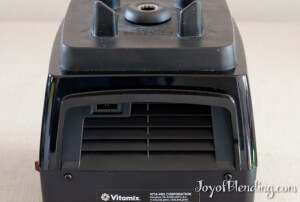 I did not make any measurements of cooling because I couldn’t think of a reasonable way to do it, but I think it is plausible that the updated design cools the motor better.

With my speed-measuring setup I can find equivalent loads between different containers. I found that 8 cups of water blended in a narrow container with the 3” blade spins at approximately the same speed as 4 cups of water in the wide 4”-blade container.

These measurements show that Vitamix’s specifications are mostly correct, with a maximum blade speed of 28,500 RPM/250 MPH for the 5200 with 3″ blade and 22,700 RPM/270 MPH for the 7500 with 4” blade. Once the motors are significantly loaded (that is, they are blending something substantial) the Classic and Next Generation models deliver the same maximum speeds. The difference is that the microprocessor control of the Next Generation models keeps the blade speed perfectly linear and insensitive to what is being blended, except for when the speed maxes out at high loads and speeds.

If you are curious about the details of how I made these measurements, check out the companion page: How to Measure Blender Speeds: Methods.