How can you measure the speed of a blade spinning at tens of thousands of RPM without fancy lab equipment? On this page I will describe how to measure blender blade speeds at home with two simple methods. The first method is a bit more involved, so if you get bogged down in it, you can skip ahead to the second method, which is easy if you have access to a laptop computer. You can read about the results in my companion Vitamix speed measurements post.

My first thought was to use a high-speed camera, but unfortunately I couldn’t figure out how to affordably get access to a fast enough camera. (There are cameras that shoot at tens of thousands of frames per seconds, but they cost tens or hundreds of thousands of dollars.) My next idea was to shine a laser at the blades and detect the flashing reflection with a photodetector. That would be a lot cheaper than a high-speed camera, but it seemed like the setup could be tricky. Then I thought of something easier.

I realized that if the blades are illuminated with a light flashing at the same frequency as the blade rotation, the blade will appear to “freeze” due to the stroboscopic effect. Serendipitously, I had recently received an Arduino kit as a gift, and the very first Arduino tutorial involves blinking an LED light. (For those not familiar with Arduino, it is an affordable and relatively easy to use electronic microcontroller1.)

The room has to be pretty dark for the LED to be the primary illumination, so I did it at night with the main room lights off. At first I hard-coded in a blinking frequency to see if I could get the blades to “freeze.” Sure enough, by adjusting the variable speed dial on the blender I was able to find a speed where the blades appeared static. After this proof of concept, I invested $4 in a rotary knob so that I could easily adjust the strobe frequency.

With a rapid prototyping breadboard, this was possible to put together quickly without any soldering: 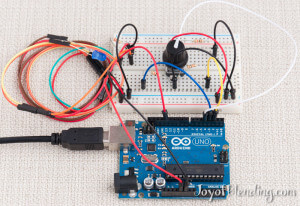 I did not have a display screen, so I used the serial-USB connection to a laptop to display the frequency.

To get around the problem of rotational symmetry, I used the fact that the blades are not rotationally symmetric when viewed from the side. (I could have instead just marked one of the blades, but the side view worked well enough.) On first glance the Vitamix blade has two-fold rotational symmetry when viewed from the side, with two of the prongs pointing straight out and two angled up. However, of the prongs pointing straight out, one points down at a slight angle:

(The first time I noticed this angle I thought that the blade had been bent with heavy use, but once I saw the same angle on other blades I realized that it must be at that angle by design.)

This asymmetry means that when the light is flashing at quadruple and double the blade frequency, the lower part of the blade appears as a doublet from the side view (due to the superposition of the differently-angled prongs). At the true rotation rate there is only superposition of the same prong, so the doublet disappears. This allowed me to confirm that in fact the four-pronged pattern that occurred at one eighth the frequency of the eight-pronged pattern was the true rotation rate. (The doublet is also absent at slower multiples of the true rate, so it is necessary to look for the fastest speed that gives a singlet side-view.)

The disadvantages of this method are: it requires an Arduino, you have to carefully sweep out all the frequency multiples to figure out the true rotation rate, and it is impossible to do if there is anything in the blender because you can’t see the blades. Even blending something clear like water does not work because air bubbles get whipped in and make it impossible to see. My next method avoids these disadvantages.

I wasn’t sure how well this would work, but it turned out surprisingly well. We all know that blenders make a lot of noise. What if some of the sound directly corresponds to the frequency of the rotation of the motor and blades? As a first hint that this might work: if you pay attention to the sound as you change the speed of a blender you might notice that the pitch changes. Blender speeds of tens of thousands of RPM correspond to hundreds of Hz, solidly in the audible frequency range (middle C on a piano is ~260 Hz). In fact, Itzhak Perlman has an entertaining rendition of Twinkle Twinkle Little Star played on his Vitamix.

To quantify pitch, we can record it onto a computer and then analyze the frequency spectrum. This might sound daunting, but it’s quite straightforward. If you have a laptop, it probably has a built-in microphone that should work. Frequency analysis can be done with a few clicks if you download the right software. We want to calculate and plot the frequency spectrum to look for the dominant frequency.

I used the free, multi-platform, open-source software Audacity to record the blender sound and then analyze it. You can select a portion of the sound recording and go to Analyze→Plot Spectrum to view the frequency components. Audacity will give you a plot that looks like this:

If you mouse-over the peaks, it displays the frequency. Note that dB on the vertical axis is a log scale, so that peak is even more significant than it appears. (In fact, because of the way Audacity displays the plot, the narrow peak is actually even higher than shown—it’s just that it is so narrow that the top didn’t get plotted.) This is a spectrum of the maximum speed of a Pro 750; it matches the strobe measurements!

Audacity will also display a spectrogram of a sound recording. A spectrogram is essentially the frequency spectrum plotted versus time, so it allows us to view how the frequency changes over a full sound recording. I made these recordings by setting the blender to the lowest speed, waiting ~5 seconds, then hitting two wooden spoons together to indicate the speed was about to be changed, then adjusting the speed to the next highest setting, and so on for all speed settings. The whack of the spoons shows up as a vertical bar in the spectrogram because it doesn’t have a strong characteristic frequency. Here is a spectrogram of an empty Vitamix Pro 750 stepping through all of the speeds: 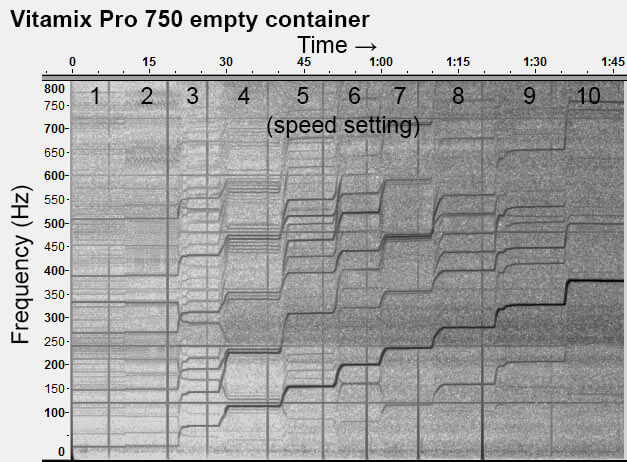 One strange thing is that the Pro 750 and the 6300 that I tested both had hardly any change between speeds 1 and 2. All other speed increments increased the velocity the same amount on those models. The 7500 speed increments were the essentially the same for all speeds (including 1–>2), except for 9–>10, which was a bit less.

These sound measurements also allow us to make measurements while the blender is actually blending something. To keep everything simple and standardized I just used water. With 8 cups of water the spectrogram of the increasing speeds of the Pro 750 looks like this: 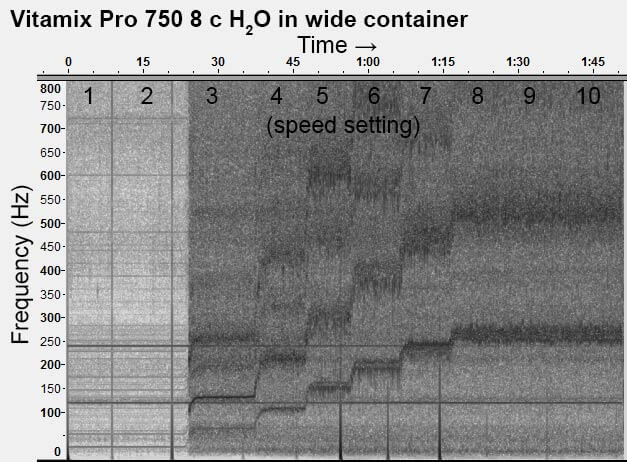 You can see that the spectrum is noisier (particularly starting at speed 3—I believe this is the onset of turbulence), but the blade rotation rate is still apparent. You can see the major characteristic of the Next Generation Models: at increased loads the low speeds stay the same, until they reach the maximum speed for that given load and the speed levels off.

With a blending load, the Standard models have the same maximum speeds as the Next Generation models. The difference is that on Standard machines all of the speeds decrease when the load is increased. For more details and discussion of these differences, see my Vitamix speed results post (which includes plots of the speed measurements).

I made measurements of blender speed with two simple setups. One using an Arduino-powered strobe, and the other with a laptop to record sound. If you would like more detail, or if any of the writeup is unclear, please do not hesitate to ask questions!

1. A name-brand Arduino board goes for ~$25 on Amazon.com and serviceable off-brand ones can be cheaper. For starting out, a kit with a bunch of different components is nice, so you can just start tinkering. ↑

Did you enjoy this write-up?