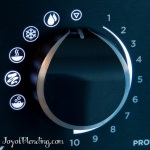 If you’ve ever wondered exactly what the different Vitamix preset programs do, this post is for you. The programs ramp the machine through a sequence of speeds, and I thought it would be interesting to find out what those sequences are. Since I previously figured out how to measure Vitamix speed, it was straightforward to measure the program sequences.

I measured the three main home-use Vitamix models with preset programs: the Professional Series 750, the Professional Series 500 (aka 6300), and the S55. (This post will not cover the commercial line used in smoothie shops and the like.) If you want to learn more about the differences between Vitamix models, check out my Vitamix comparison page. It includes a chart that shows the models without programs that correspond to each of the models with programs.

The speeds shown in the chart below are the equivalent speed on the variable speed dial. So if you were to move the dial through the speeds in one of the plots for the prescribed times, the result would be equivalent to that program.

As far as I know, Vitamix has not changed the preset programs over time, but, for completeness, the tested Pro 750 and Pro 500 were purchased in 2013, and the S55 in 2015. If you have one of these models and its programs that do not match what I measured, please let me know and we can investigate.

Note that the program modes are not sensitive to what is blending, so whether you’re blending 2 cups or 6 cups, the smoothie mode will run through the same program. This is why I prefer controlling the speed manually—different amounts and ingredients can require different processing times. However, if you follow the Vitamix cookbook recipes, or just get used to the programs, they can make life a little easier. Some people also like the preset programs because they make the machine less intimidating, although I think anyone can learn the manual controls within a few uses.

If you have a machine with programs, you can use these measurements to fine-tune your choice of programs. Say you have a Pro 750 and wish the Smoothie program would run a little longer—you can use the Frozen program instead to get it to run for an extra 10 seconds, or the Puree program for an extra 14 seconds. I have not done testing on how the different speed ramp-ups affect blends, but my guess is that they do not make too much difference.

Slightly strangely, the Pro 750 Soup and Puree settings only go up to speed 9.5, although this is only apparent if the blades spin freely in air, and in practice 9.5 is indistinguishable from 10. For the models with microprocessor control (which includes all models with presets), once the blades encounter resistance from blending something, the top speeds are equivalent.1

I do not mean to imply that you need to follow these programs closely for good blending performance. I’m presenting this information more just to satisfy curiosity. When I blend, for most things I usually ramp up the speed quickly (within ~2 seconds) from low to max, and then use the tamper if the ingredients are not circulating. Sometimes if I want to avoid using the tamper I will let it run a little longer (up to ~10 seconds) at low speed before ramping up, and that can help. Then I decide to stop based on how the blend looks, and sometimes I sample it to double check. It’s easy enough to blend for an extra 10–20 seconds if the blend needs more time.

1. You can confirm this by blending something and turning the speed control knob through the manual speeds from 1 to 10. You can hear the pitch change, but it will stop changing at some point, probably somewhere between 7 and 8. This makes some people think their machine is defective, but it is normal. If you do the same speed ramp-up with an empty container, you will see that the speed continues increasing all the way to 10. (For more details, see my Vitamix speed page.)