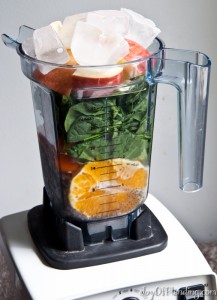 This is a simple smoothie, or what the Vitamix folks refer to as a “total juice” (to indicate that it contains the whole fruit; not just the juice separated from the fiber). This is the sort of thing I make most frequently.

This recipe builds on the classic combination of carrot-apple-ginger. As with most smoothies, the exact ratios don’t particularly matter. The only part that makes much difference is the amount of ginger. Not enough and it’s too mild, too much and it can be a bit overpowering. If this comes out not gingery enough you can easily add a bit more and blend for another 5-10 seconds. If it’s too strong for your taste, well, you can scale back the ginger next time. The spinach dominates the color, but not the taste.

Makes just over 4 cups, which can be from 1-4 servings depending on your appetite.

Add items to the blender roughly in the order listed. Peel the orange with a knife, leaving some white pith, but removing all orange skin. Scrub the carrots with a vegetable brush and cut them in half. Quarter and core the apple. Peel the ginger. Once everything is added, put on the lid, turn blender on low and turn up to full power and blend for about 30 seconds. You’ll probably need the tamper to get it circulating at the beginning.