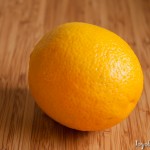 Oranges are a great ingredient for fruit smoothies such as this, or this. I find their flavor to go with most fruits, and they’re usually quite cheap (at least when they’re in season). I prefer Navel oranges primarily because they have no seeds. I don’t think it’s a big deal to put orange seeds into the blender, but I generally avoid it. Valencias are a bit juicier, though I’ve found that it doesn’t make much difference for smoothies–you can always add a little water. Valencias are mostly available in the spring/summer, while Navels are around in the winter/spring.

When picking out oranges the color does not particularly matter. Valencias can be greenish yellow and still be perfectly good. Fruits that are heavy for their size are best. As with all fruits, try to avoid ones that are obviously bruised.

I usually peel them with a knife, spiraling around the fruit, and leaving some of the white pith. It doesn’t hurt the flavor of the smoothie, and it adds a bit of fiber and vitamins. If I’m using a Valencia I’ll then cut it in half a couple times to dig out the seeds. I suspect that it’s OK to leave them in, but I think they detract from the flavor a bit. Here’s a video of my method:

One side note that I learned from personal experience: while the pith of oranges is perfectly fine to include, watch out for the pith of limes. I once was making something that included lime, and I figured I would treat it the same way that I do oranges. Terrible mistake! The pith of limes is very bitter, so if you want lime juice you should just squeeze it out.