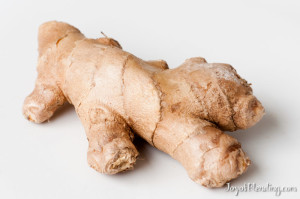 I’ve been adding ginger to smoothies for a long time, but I only recently learned that you don’t have to peel it. Just cut off a piece, wash it, and toss it in the pitcher. Its flavor has a nice strong profile that stands up well to combining it with more bitter greens such as kale—if you’re trying to move beyond baby spinach in green smoothies, I highly recommend trying ginger. Even if you’re not having bitter greens, it still tastes awesome.

The classic ginger combination is with carrots and apple, but it also goes with many other combinations when you want to add some spice, such as with sweet potato or pumpkin.

Some ginger is more fibrous than others, and if you use a large piece sometimes the fibers do not get cut by the blender blades, leaving a lump of ginger fibers in your smoothie (even in a powerful Vitamix or Blendtec). If this ever bothers you, you can slice the ginger before putting it in the pitcher. ~1/8″ slices should be fine (cut perpendicular to the length of the root, so that you get approximately round slices, because the fibers run along the length of the root).

When picking it out look for pieces that are relatively smooth and firm. You don’t want one that is wrinkly or soft. It keeps for a couple of weeks in the fridge. It’s best to store it in a bag or a container so it doesn’t dry out, but you want to try to avoid drops of water/condensation because it can get moldy over long periods of time.

Finally, if you ever feel the need to peel ginger, try scraping the skin off with a small spoon instead of a normal peeler or knife, as it will remove less of the ginger flesh (and I think the most flavorful part is the bit directly under the skin).