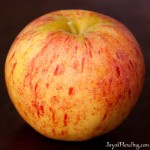 I use a lot of apples in smoothies, particularly this time of year when they are so abundant. We have a small apple tree that has yielded a surprising number of apples this year.1 Apples can lend a nice bit of mild sweetness, as well as adding a little body. I generally like to combine them with a stronger flavor, which lately has been berries or ginger.

Look for firm, unbruised fruit, and don’t be afraid to try new varieties. When I first had my Vitamix I always bought Red Delicious because that was what was suggested in the Vitamix recipe book, but these days I’ve been favoring Braeburn and Gala. However, it usually gets blended with so many other flavors that the variety doesn’t make too much difference.

To prepare I wash them, and then cut them into quarters to remove the seeds and a little bit of the surrounding core. Apples are one of the harder ingredients, so in order to minimize need for the tamper I add them after any softer ingredients if possible.

I have not done any systematic testing of this idea, but I suspect that smoothies made with apples should be consumed right away, because of oxidation. I have noticed that smoothies kept in the fridge for half an hour to an hour develop a bit of an off-taste, and I think apples may be one of the major contributors. When you cut an apple and leave it out it turns brown from oxidation, and in the Vitamix the apple is cut into tiny tiny pieces and well-mixed with bubbles of air. This is another reason to add plenty of ice when blending: a cooler temperature will slow down oxidation.

Because of a few bad experiences I haven’t done ongoing testing to see what sorts of smoothies last in the fridge. I was surprised to read that some people store smoothies for up to a day or two. If anyone actually stores them without significant quality loss, I would be curious to hear what ingredients you are using. 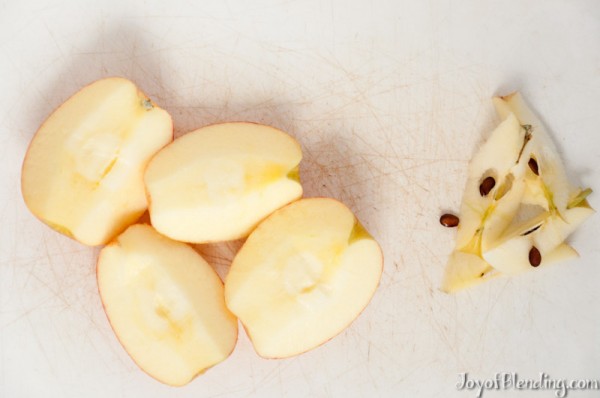 1. Past years the apples were over-run with some sort of caterpillars, but this year I followed advice I heard to aggressively thin the apples so that none of them end up touching each other, because the caterpillars like to hang out at the place where apples touch. Well, either it worked, or we got lucky for some other reason, because most of the apples are caterpillar-free. It feels like a terrible waste to throw away so many immature baby apples, but it’s worth not having the apples full of caterpillars. Also, supposedly the remaining apples grow larger, though on our tree none of them got very large. Go back up