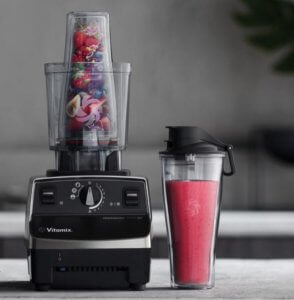 Vitamix just released a new Personal Cup Adapter for their Classic models. (Available in the U.S. and Canada. If you order via these links, Joy of Blending may receive commission.) You can blend in the cup, then unscrew the blade and drink out of the cup. It also comes with a secure to-go lid. It uses the same 20-oz double-wall smoothie cup as Vitamix’s S-Series personal blenders, but the blade base has a safety collar. (The S-Series uses magnets for a safety detect system that prevents running without the cup in place. The Classic machines don’t have such a detect system, so Vitamix added the collar to ensure the blade is always protected.)

As far as I can tell, Magic Bullet started the single-serving blender trend in 2004 with a blitz of ridiculous, but apparently effective, infomercials. These blenders have proven extremely popular, as more and more people are looking to eat wholesome foods on the go. However, the Magic Bullets are notorious for developing leaks after steady use, so Vitamix is bringing quality and durability to this space.

I’m personally fine with blending in a classic container and then pouring into a cup, but I know many people love these cup blenders. I even know people who have kept a bullet blender alongside their Vitamix. Now the Vitamix can do it all. You don’t have to clean the container before leaving the house, and the blade base is dishwasher safe. The small size is also convenient for blending small amounts.

Even if you’re not sure if this will fit your machine, it most likely will. It works with all home Vitamix models sold since the mid-nineties, with the exception of the recent S-Series personal blenders and the brand new Ascent line. Compatible models include ones that have a base that look like either of these (controls may vary):

The adapter also works with the Explorian Series (E310 and E320).

This product release means that Vitamix is providing the individual blender cup option on all of their models. Personal cups have been available for the S-Series since launch. The single-serving cups for the Ascent Series were initially scheduled for spring, but I’ve heard that a production delay means that they will be available late spring or early summer. (The Ascent Series uses a combination of magnets and NFC technology to detect containers, so it does not require the safety collar.)

Vitamix does not advertise it, but, I’ve tested, and the 8-oz Ascent containers work with this adapter.