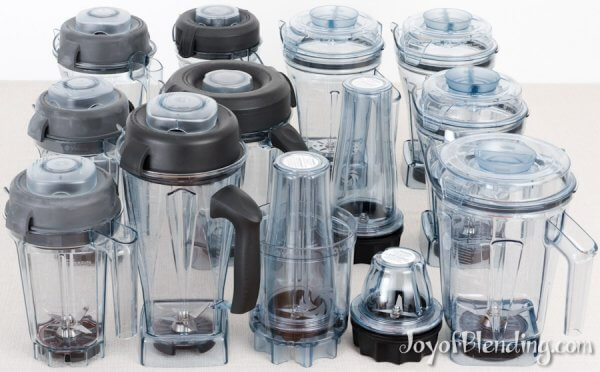 In recent years Vitamix has greatly expanded their range of containers. (Each container in the photo above is different!) Here I will explain which containers work with which machines.

Are all Vitamix containers interchangeable?

No! (They used to be, but with more recent releases, that is no longer the case. Unfortunately, outdated information persists online.)

I will cover all household Vitamix machines sold since the early 1990s, based on hands-on experience. I do not have direct experience with the older metal machines, and for those I recommend checking with this seller on eBay.

Here’s a chart with an overview of compatibility:

Each Vitamix machine has one of three types of container interfaces (left to right below): “Space Saving,” “Classic,” and “Smart System.

These models came out in 2014, and they are smaller than Classic machines. They can only be used with the two containers that they come with (20-oz and 40-oz screw-on blade containers). They have been alternatively called Personal Series and S-Series. There are three different models: S30, S50, and S55.

Most models sold since the early 1990s fall into this category. These models include the C-Series, G-Series, and Explorian Series. The Classic machines can be used with all containers, but they require the Personal Cup Adapter to use the screw-on blade containers.

Vitamix released these models in December 2016. They use NFC to detect that a container is in place, so they can only be used with containers that contain an NFC chip. Their containers are indicated with the phrase “SELF-DETECT.” These models include the Ascent and Venturist models: A2300, A2500, A3300, A3500, and V1200.

You can recognize these containers at a glance because they have clear lids.

8-oz cups only w/ SELF-DETECT; or bundled with blade base

20-oz cup only w/ SELF-DETECT; or bundled with blade base

I mentioned that all Classic containers fit on all Classic machines. One caveat is that Vitamix says that the Low Profile 64-oz container is not compatible with certain machines. They say that the wide container requires machines with 2.2 peak horsepower, and that the 5200 and similar machines only have 2 peak horsepower. However, I’ve made power measurements, and there isn’t a 10% difference in power between those types of models. The only significant difference is the airflow design on machines that look like the 7500 vs machines that look like the 5200. However, Vitamix started selling 5200-style bases with the wide container (5300 and 6500), so they must have decided that they can handle it. Just be a bit more mindful of not overheating the machine, and a wide container on a 5200-style base works fine.

One other thing to keep in mind with using a wide container on the 5200 is that all of the machines that come with a wide container have an electronic “soft start.” That means if you start the machine at maximum speed, instead of immediately giving it full power, the speed control will ramp up the speed over about two seconds. This is easier on the machine, and might be a reason that Vitamix doesn’t want people using wide containers on 5200-style bases. It’s always best practice to start on low and quickly ramp up the speed, but it’s even more important with the higher resistance faced by the longer blades in the wide container.

On first glance these 20-oz containers look the same, but they are not! They can both be used with the Personal Cup Adapter, but they are not interchangeable between Space Saving and Smart Series models. The difference is on the lips of the cups. The Space Saving one has two tabs, which both contain small round magnets. The Smart System one has a wider lip that extends all the way around the cup, and it has two elongated magnets.

Vitamix does not advertise it, but, the Personal Cup Adapter uses the same threading/blade as the Space Saving 40-oz container and the Smart System 8-oz cups. Online Vitamix only sells the 40-oz container bundled with a Space Saving machine. However, if you call them, you can buy it by itself. Last I checked, it was $54.95.

Update: Some people have been unable to unscrew the 8-oz container from the Personal Cup Adapter. Vitamix has issued this statement “The 8oz Blending Bowls should not be used with the Personal Cup Adapter under any circumstances. Doing so can result in damages that may not be covered by your warranty.” That said, I, and multiple people I know, have used them together without any problems.

Vitamix sells a wrench for removing the blades. In case you’re wondering why they sell the wrench when removing the blade assembly voids the warranty, I believe it is because the wrench is nominally for their commercial line. However, it also fits most home models. It does not work with Smart System containers, because they use a different retainer nut. If you need to make a repair and you are out of the warranty period, changing the blade (carefully!) could save you some money.

The Classic Tamper is mainly for the tall 64-oz container. Because of the intermediate flange, it also works with the rubber lid 48-oz and 32-oz containers.

The Mini Tamper only works with the rubber lid 48-oz and 32-oz containers.

The Low Profile Tamper is for the 64-oz low-profile classic container, all of the Smart System containers, and the Space Saving 40-oz container.