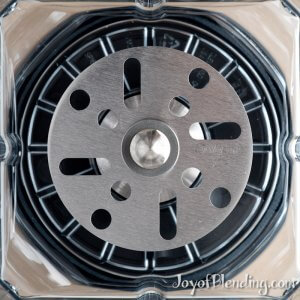 Here’s my review of the Vitamix Aer Disc Container. Instead of blades, it uses a disc with holes in it, which makes it less aggressive. They named it Aer for aeration, referring to its ability to whip up foams. It can also extract flavor from ingredients for drinks, and emulsify sauces and dressings. It works on all full size (non S-Series) models, so that includes everything from the classic 5000 up to the latest Ascent models. As usual, if you order via my link, you get free shipping, and Joy of Blending gets a commission.

Vitamix does not intend for users to remove the disc from the container, so you shouldn’t plan on swapping it into an existing container.

Vitamix advertises the Aer disc container as performing four culinary tasks. Here is my explanation and experience with each task:

This refers to making whipped cream. The thing is that the standard wet blade Vitamix containers can make perfectly good whipped cream. I did a quick side-by-side test with a half cup of cream, and, as expected, the Aer disc whipped up a bit firmer, but the standard 3” wet blade was still satisfactory. (½ cup is right on the border of the smallest amount that will work in both containers.)

Culinary emulsification is combining oil and water-based ingredients in a mixture of microdroplets for a dressing or spread (e.g. vinaigrette or mayonnaise). As with whipping, the standard wet blade containers can do this. I’ve made plenty of well-emulsified vinaigrettes in a wet blade container. I’ve never really liked mayonnaise, but for this review I tested making it. I used Vitamix’s vegan recipe, and it came together perfectly with the standard wet blade. Because it doesn’t have blades, the disc is more gentle, so for tricky emulsions it may help a bit, but I think in most cases the standard containers work well enough.

Muddling is a cocktail-making technique that mashes flavorful ingredients in the glass. Because the Aer disc doesn’t have blades, it can agitate ingredients without cutting them. I was most impressed with the disc’s treatment of citrus. It can extract the juicy part of the fruit while leaving the skin, pith, seeds, and even the dividing walls intact. Here’s what lemon slices look like after a spin with the Aer disc (the green bits are mint): 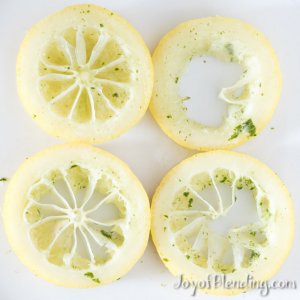 I tested making a mint lemonade, and I found that to fully extract the lemon, the mint gets over-muddled. So if I were doing it again, I would add the mint later in blending, and lower the speed to medium after the lemon is extracted.

The other trick is that you can add ice, and the disc will not pulverize it. So you can cool a cocktail or lemonade and leave ice cubes intact, in the same way that you would use a cocktail shaker.

You can strain out the solids by unlatching the lid and then holding it in place as you pour. This works surprisingly well to keep ice, seeds, skins, etc. in the container.

Another popular recipe is strawberry lemonade.

This task is quite similar to whipping, in that it involves incorporating tiny air bubbles into a liquid. Vitamix mainly highlights making milk foams for coffee drinks. They say that it only works with skim milk, but I actually had good results with whole milk. Skim milk foams are more stable though.

The standard blade container can add some froth to milk, but it’s usually a light foam that floats on top of the liquid. The Aer disc can incorporate all of the milk into a denser and more stable foam. Here’s a side-by-side comparison:

Starbucks uses the Vitamix Aer disc to make their cold milk foams. The thing is, in most cases for home coffee drinks, a small milk frother like this one is sufficient. The small frother is more convenient and much cheaper, though the Aer disk can make more robust foams.

Some liquids hold a foam much better than others. I tried making a foam from soy milk with the Aer disc, but it just made a froth floating on the liquid. I also did a side-by-side comparison of hot chocolate, and the standard blade made a drink that was almost as foamy as the Aer disc: 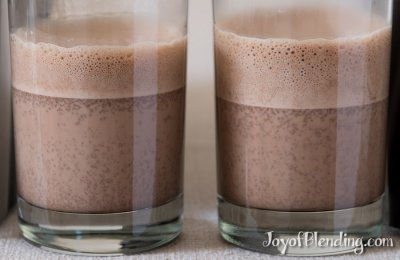 I was excited to try making aquafaba foam. (Aquafaba is the liquid left behind after straining out cooked or canned beans, typically chickpeas. It is possible to beat air into it similar to what you can do with egg whites, and you can use it to make meringues and other vegan desserts. Many people agree that the bean flavor does not carry over, and the transformation from bean water to a voluminous foam is kind of magical.) People usually use an electric mixer or stand mixer. In the past I tried using a standard Vitamix container, and it was able to whip up a foam, but I was not able to get stiff peaks for meringues.

I attempted to use the Aer disc to make an aquafaba foam with stiff peaks. I was able to get it to a soft peaks stage, but I could never get it to stiff peaks. Also, when I added sugar, it softened further. The following images shows the increase in volume and the best peaks I was able to form (without sugar):

I tried a variety of techniques (different speeds, with and without tamping, using powdered sugar, using cream of tartar). After the third failure to form stiff peaks, I transferred the aquafaba mixture to a bowl and used an electric mixer. Within a few minutes I had stiff peaks, so I confirmed that there wasn’t a problem with the aquafaba.

Vitamix lists an aquafaba “fluff” in the Aer disc recipes, and the recipe notes make it sound like they also were not able to get stiff peaks from aquafaba.

The standard wet blade Vitamix containers can whip, emulsify, and foam to an extent that is usually perfectly satisfactory. With some ingredients, the Aer disc works a bit better, but on the whole it’s not a huge difference. If you only have a wide container (64-oz low profile), then the Aer disc will allow you to do these tasks with smaller amounts, but a 32-oz or 48-oz container would also work, while allowing you to make smaller amounts of more common blends like smoothies.

On the other hand, muddling is a technique unique to the Aer disc. It does a surprisingly good job of extracting the fruit from citrus, and the lid makes it easy to strain out the solids. If you’ll be blending up a lot of cocktails or lemonade, the Aer disc could be a nice addition to your arsenal. If you are at all tempted, note that it is covered by Vitamix’s 30-day trial period, so you can return it within 30 days for a full refund if you don’t find it worthwhile.

Epilogue: Tips for Use

I suspect that the optimum foaming speed depends on volume and viscosity. I think that the best speed is the fastest speed before it starts splashing up. Also note that Vitamix’s recipes indicate a speed, but they do not indicate which machine they are referring to. I believe they are referring to Ascent speeds, and the mid range of Ascent speeds are considerably slower than on other models. For example, speed 6 on Ascent is equal to speed ~3 on G-Series and Explorian (for more info on speed equivalents, so my speed plots of Ascent vs G-Series, and G-Series vs 5200),

To make a foam, you need a minimum of 1/2 cup of liquid, because you need enough to cover the disc.

To do the citrus extraction trick, you need at least 1.5 cups of liquid to get the flow going. I tried with 1 cup, and the lemon slices just got stuck.