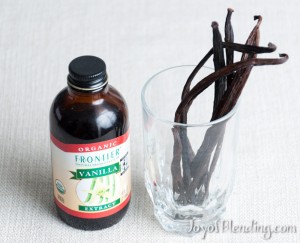 Vanilla is a delicious ingredient that can give variety to your smoothies and take them to the next level. It’s enough of a premium ingredient that I usually only use it in simple combinations where its flavor is not overwhelmed by stronger flavors. It turns out that both vanilla extract and whole vanilla bean are great in smoothies.

The more accessible option is vanilla extract. I used to think that you needed to cook off the alcohol when using vanilla extract, but it turns out that it gets diluted enough that the alcohol is generally not a problem in smoothies. You can start by trying about a half teaspoon per 16-oz of smoothie.

For a more complex flavor you can use the whole bean pods. I recently tried them for the first time, and I was quite impressed. I poked around online, and all the write-ups I found instructed you to cut open the pod and scrape out the soft insides. However, a friend (who was also the source of the beans) suggested using the whole thing. If you just scrape out the inside, you don’t get all of the available flavor. Since this is a high-performance blender blog and Vitamix and Blendtec machines have plenty of power, I decided to give it a try (also see, “If your blender has the power, use it!“). I cut off the very ends of the bean—just a few millimeters—and tossed it in the Vitamix whole along with my other smoothie ingredients (latest recipe coming soon). To my surprise, the result was not at all fibrous. There were some visible tiny black specs, but the texture was smooth.

I suspect that the scraping instructions are necessary for weaker blenders, or for recipes that don’t use a blender at all. If you have a Vitamix or Blendtec, don’t waste the outer pod!

I added a 5-inch pod to a 30 oz smoothie and it was good. If your beans are in short supply, you could probably add less.

I should note that so far I’ve only used this one batch of vanilla beans, and they seem a bit on the dry side. It is possible that that makes them easier for the blender to blend into tiny bits without leaving fibers. I guess I should also note that I have not yet done any blind taste tests comparing extract and beans. The whole beans are certainly more exciting, so that may have affected my perception of taste. There is of course also a wide range of different types of extracts and beans, not to mention the powders and pastes!