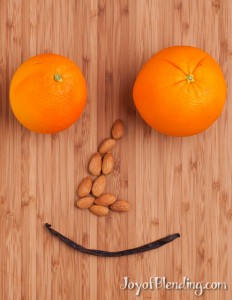 As I mentioned in my last post about vanilla, I usually like to keep the ingredients simple when using vanilla so that it doesn’t get lost among stronger flavors. This smoothie maximizes the flavors of orange and vanilla. It’s not an attempt to replicate an Orange Julius, it just draws inspiration—slightly creamy, orange-vanilla goodness. I didn’t add any sweeteners other than the oranges, so this will not be as sweet as a traditional Orange Julius. You could of course add sweetener if you like. Over time our taste buds can adjust, and if you cut down on sweets you will likely find that you don’t need as much sugar for things to taste good.

*If you want intense vanilla flavor, you could double this amount of vanilla.

Blend on high until smooth—a little longer than usual to get the almonds and vanilla pod totally smooth. I blended for 70 seconds. Makes ~20 oz.

You could also use almond milk instead of the whole almonds, but I like to take advantage of the Vitamix’s power to blend the almonds fresh for each recipe. (see: If your blender has the power, use it!) 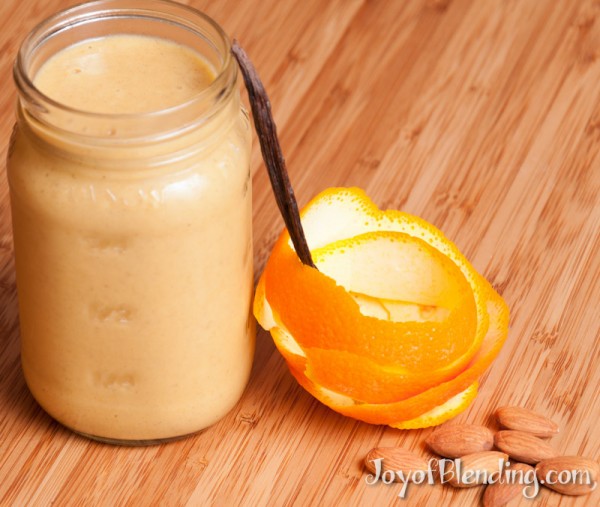 When I was setting up the photos I had a déjà vu moment and realized that I made a nearly identical smoothie except with cherries last spring. However, that was before I found out that you can blend whole vanilla bean pods. I’ve also since decided that peeling the almonds is not necessary.

Update: I made a zesty version of this with kumquats and ground cloves in place of oranges and vanilla.