I’ve been meaning to make this since the beginning of fall, but I just got around to it this week. I adapted a recipe from another blog, and had the idea to use persimmons. I’ve found that persimmons have enough sweetness that I don’t need to add any extra sweetener, and they go with the pumpkin nicely. If you can’t find persimmons, you can use another mild sweet fruit, or you could just add a sweetener of your choosing (maple syrup, as used in the above linked recipe, sounds pretty good). I’ve been using canned pumpkin, but you could obviously also cook your own. It’s really simple: pumpkin, persimmons, nuts, spices, water, and ice if you want it cold. It comes out really smooth and creamy. 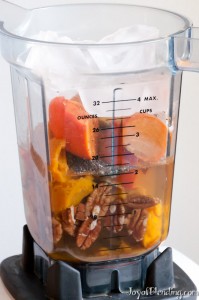 Blend it up on high and enjoy! Makes 2 moderate servings. Garnish with a little cinnamon or roasted nuts if you’re feeling fancy.

It’s good warm as well. If you don’t add the ice you should add some extra water, unless you want it extra thick. You could use 2 tsp pumpkin pie spice instead of all the individual spices. You can also substitute other nuts–the first time I made it I used almonds, and I was surprised that the smoothie with the pecans tasted almost identical. I guess the other flavors are strong enough that the subtle taste of pecans gets a bit overwhelmed.

Finally, if you buy canned pumpkin, look out for the difference between 100% pumpkin and “pumpkin pie mix,” which contains added sugar and spices, and can look deceptively similar to the 100% pumpkin. You could of course make smoothies with the mix, but I thought it was nice to use fruit instead of refined sugar.

This recipe is also good with sweet potato in place of the pumpkin. Some other tasty additions are coconut milk and cardamom.