Special Deal: Check out the extra savings on the Certified Reconditioned V1200!
($100 off displays after you add it to your cart) 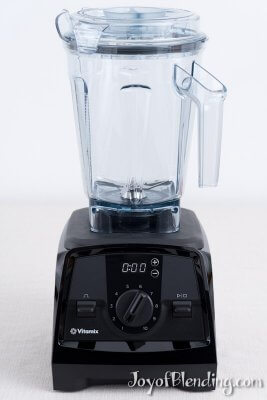 I’ve been testing out a Vitamix V1200 to write this review. As expected, it delivers the high quality results that Vitamix has built its reputation on. If you’ve been shopping around for a Vitamix, you’ve probably noticed that they make many different models. The first thing to know is that all of the full-size machines offer the same blending performance. (The only non-full size models are the S30, S50, and S55.) The differences are in features, aesthetics, and the containers they come with.

Vitamix created the Venturist line specifically for Costco. It is essentially the budget cousin to the Ascent line.

Compared to other Vitamix machines, the V1200 comes packaged with extra accessories: 8-oz and 20-oz blending cups, blade scraper tool, and tamper holder. (All Vitamix blenders come with a tamper and cookbook.)

The Venturist line has much in common with the Ascent line, so I will mainly define it in terms similarities and differences with Ascent. But first I want to warn you about one thing to consider.

The Reconditioned V1200 comes with fewer accessories. Aside from the essentials like the tamper and cookbook, it only adds the 20-oz blending cup and mini blade. Its normal price isn’t amazing, but sometimes Vitamix runs promotions that make it a great deal.

Since the V1200 comes with such an extensive package, it might seem like it would satisfy all of your blending needs. It comes with three different-sized containers, but it lacks a container type that many people find extremely useful. The V1200 does not come with a narrow container that can be used with the tamper. (The main 64-oz wide container can use the tamper, but the 8-oz and 20-oz containers cannot.)

You can buy an extra narrow container (48-oz) to use with the V1200, but that’s an added expense of $144.95. If you want to do a fair amount of blending small amounts of thick blends, you may be better off with a machine that comes with a single narrow container.

And if you want the full 64-oz capacity on a narrow container, pick one of the classic “standard” models—of those, I recommend the 5200 or the equivalent Standard Reconditioned.

Venturist features in common with the Ascent Series include: digital timer display, container detect, the same containers, and Bluetooth connection to app. The V1200 has the same type of dial as the A2300, which lets you continuously control the speed, with markings from 1 to 10. (The fancier Ascent A3300 and A3500 have a premium control knob that resets to the lowest speed automatically.)

The V1200 is slightly less elegant and louder than Ascent models. 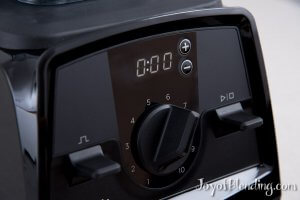 The V1200 has a settable countdown timer on the front, which is similar to that found on the A3300 and A3500. The difference is that the A3300 and A3500 use capacitive touch buttons, whereas the V1200 uses dome switch buttons. The dome switches protrude a bit and require more force to activate than capacitive buttons. The V1200 buttons work perfectly well, but the Ascent touch buttons look and feel a bit more elegant.

Another difference with the Venturist timer that is slightly annoying is that it takes longer to set. Getting to the maximum 6.5 minutes takes 6 seconds on the A3300 and A3500, but takes 20 seconds on the V1200. That said, I rarely use the countdown feature on my A3500. I do appreciate seeing the count-up timer, which doesn’t require any extra button presses. (The count up timer is on all Venturist and Ascent models.)

However, it’s worth noting that all Ascent and Venturist models have maximum blend times that depend on the container. For the 64-oz container, the maximum is 6.5 minutes. So if you want to use the Vitamix to heat something like a soup or a sauce, you can leave any Venturist or Ascent model running, and it will automatically turn off after 6.5 minutes without requiring any countdown timer or program mode.

The base shell has some elements of Ascent, and others of legacy Vitamix models. The front panel is the same shape as the legacy G-Series. It lacks the distinctive curved bevel found on the side of Ascent models, but it has the same back vent as Ascent models. 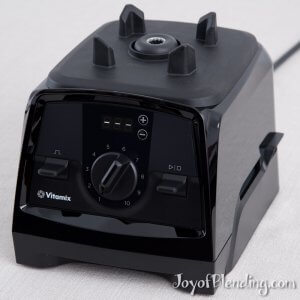 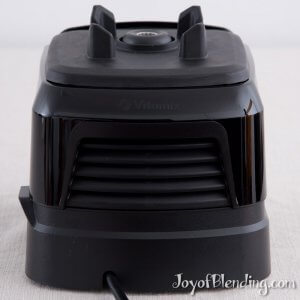 The Venturist base has less sound muffling than the Ascent line, which I determined by making some sound measurements. However, much of the blending noise comes from ingredients slamming around the container, so in practice the differences are minor. But Ascent machines are quieter. Here are the results of my tests:

Water is noisier than some blends and quieter than others. I made these measurements using a RadioShack sound level meter. Blender noise can depend significantly on surroundings, so I swapped each model into the same location for each measurement, and kept the sound meter fixed in the same spot in front of the blender. Even set to “slow readout,” the readings jump around, which is why I’m reporting ranges. Also note that decibels use a logarithmic scale, so the differences are greater than might be intuitive. That said, once you are blending loud ingredients, the differences between models are quite minor.

Summary comparisons to each of the Ascent models

All Ascent models have a base design that is slightly more elegant and quieter than the V1200. Here is a view that shows the Ascent curved bevel (right) and the Venturist’s (left) more plain design: 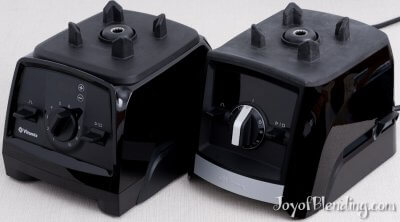 (For more views of the Ascent bevel, see my Ascent review.)

V1200 has the settable countdown timer, while A2500 does not. The A2500 also has 3 preset programs (smoothies, frozen dessert, hot soup), which the V1200 does not have. However, you can use preset programs on the V1200 if you send them from the app.

Both have the settable countdown timer, but the A3300 uses flat capacitive buttons, whereas the V1200 uses raised dome buttons. This makes the A3300 look and feel more premium. Similarly, the variable speed knob on the A3300 looks and feels more premium than the V1200’s.

See A3300 comparison directly above, then add 5 preset program touch buttons on the A3500. Also, the A3500 has metal base options for the most elegant look. The metal base is also a better sound insulator, which makes the metal A3500 the quietest. Here’s a view of the V1200 compared to the the A3500 premium interface:

The V1200 and E320 are the two models sold at Costco, so if you are considering the V1200, you are probably also considering the E320. The main difference is that the V1200 has a range of new technology, which it shares with the Ascent Series. The extra features are:

Are these extras worth paying more for? It really comes down to personal preference. If you’re excited about the extra features, I say go for it. But know that you can blend just as well with the E320.

This comparison is almost the same as the V1200 vs E320 directly above. The only difference is that the 7500 is a more premium machine than the E320. That means that it is a bit quieter, and it has the secondary on-off switch on the side.