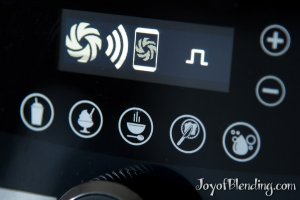 Vitamix has updated their free app for iOS and Android, so that it now communicates with Ascent Series blenders via Bluetooth. The photo to the right shows the display of an A3500 receiving a blending program from the app.

Vitamix (in partnership with Perfect Company) first released the Perfect Blend app last year, to go with their smart scale. You do not need a smart scale to use the app, but having the scale makes it slicker. Likewise, you can use the app without having an Ascent model, but of course you’ll miss out on the connectivity. Update: the scale is now available reconditioned at a discount.

This app release completes the loop of connectivity between app, scale, and blender that Vitamix has been working towards for some time. Here’s an illustration from one of their patents: 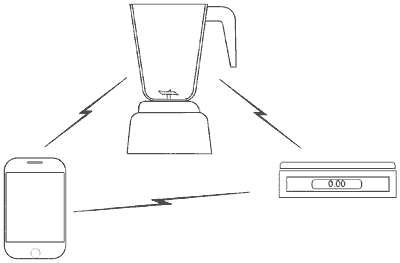 So, what does the connectivity enable?

The main new capability is that the app can send blending programs to Ascent and Venturist blenders. (It can send programs to all Ascent models, including the A2300 and A3300 that do not have programs on the control dial.) The programs take the blender through a series of speeds.

In addition to the 5 programs found on the A3500 (smoothies, frozen dessert, soup, spreads, self-cleaning), the app adds 12 additional programs:

You can send these programs to the blender without being in a recipe in the app. You can also follow an app recipe, and after it has directed you to add ingredients, it will send the appropriate program to the blender.

Another useful new feature is the app enforces minimum and maximum batch size according to container and recipe type. This is something that I was disappointed that the original version of the app didn’t have, so I’m glad they integrated it into the new version. (You can scale a recipe up or down by volume or by calories.)

However, the batch size enforcement can be inconsistent and overly restrictive. For example, while using the 64-oz container, some soups limit you to a maximum of 40 oz, and others limit you to 56 oz. I’ve blended many 64-oz soups over the years without any problems. [Update: The soup that said the 64-oz container is too small now has a range of 35–40 oz. So at least it’s possible to make, but, there is still the inconsistency with the other soup recipe allowing 56 oz. And I still believe the maximum should be 64 oz.]

I also think it would be even better if the programs could adjust themselves in real time. For example, when starting a blend, sometimes an air pocket forms around the blades, and the motor revs up without making blending progress. You can deal with the air pocket by using the tamper, or sometimes by temporarily reducing the speed. If the blender spends longer with an air pocket, the total blend time should be extended, and this is something that smarter adaptive blend programs could do. Maybe we’ll see this functionality eventually. But in the meantime, it is nice to see blending programs that run longer for larger volumes.

You can also create custom blend programs in the app. In the current version this function is a bit limited: you can only specify a single speed and time. So you can’t program a sequence of different speeds.

What Bluetooth blending is not

A note about using blending programs via Bluetooth: this is not remote blending. The intention is not for you to be able to start a blending program from the couch or another room. For safety reasons, you have to physically touch the blender controls twice before a remotely-loaded program will run.

My favorite other feature is that you can select dietary preferences or specific ingredients to exclude from the recipe browser. I hate bananas, and this feature makes it so that I don’t have to scroll past tons of banana smoothies.

The app also has a “pantry” to list ingredients you have on hand and shopping list generator for ingredients you need. I haven’t found the pantry useful for fresh blending ingredients because what I have changes too frequently.

To conclude, I think it’s worth stepping back and going over the goals of the app. It helps users:

The new connectivity makes the app more worthwhile for people who like automatic blending programs. It extends the scope of programs and makes them more accurate. Here are the links to the app: