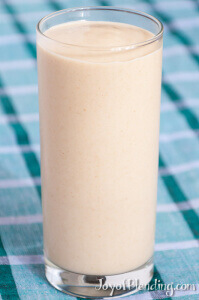 I came across frozen figs at Trader Joe’s and decided I had to make them into a smoothie. I blended them with pecans and a pear, and this combination is delicious! Sweet, aromatic, and out-of-the ordinary. (The Trader Joe’s figs are green skinned, which is part of why the smoothie is so light colored.)

The fig seeds blend up nicely in a Vitamix. Their texture was undetectable on the tongue, and just barely noticeable as fine particles if you ran the smoothie between your teeth.

Figs are so delicate that I think getting them frozen is a great idea, especially for smoothies. (If you thaw and eat them whole, the texture is a bit off, but that is a non-issue for smoothies.)

I used a Bartlett pear, which worked well.

If you use fresh figs and want a very cold smoothie, add another 6 ice cubes instead of the cup of water.

Blending in the pecans adds flavor and creaminess. In a sense, adding nuts and water is like making instant nut milk in the smoothie, which I am big proponent of (particularly if you have a Vitamix). I previously described this concept in the post, “If your blender has the power, use it!“