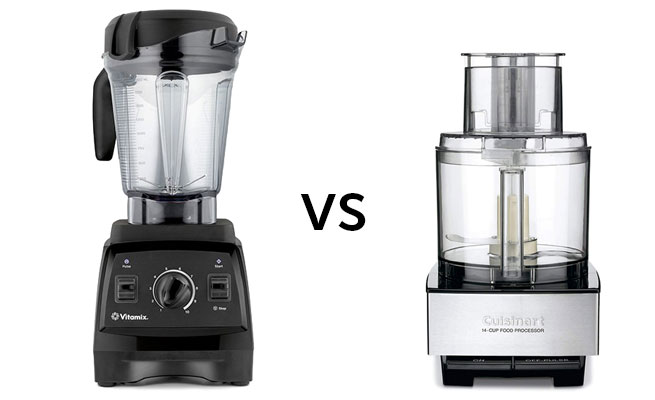 Can a Vitamix replace a food processor? Vitamix machines and food processors are both quite versatile. Which one is better depends on what you want to use it for.

Vitamix machines are generally more convenient, partly because they tend to be easier to clean. The Vitamix blade stays in place and cleans itself by blending soapy water. On the other hand, some people find scraping thick mixtures from a food processor’s shallower container easier. (I don’t think scraping out a Vitamix is a problem, as long as you have the right tool.)

Most people use a Vitamix frequently enough that they prefer to keep it out on the kitchen counter, whereas they’re more likely to stow a food processor away in a cabinet.

Food processors have the advantage of additional cutting disks, which allow them to evenly slice and grate ingredients.

Home Vitamix blenders are the same heavy duty quality as their commercial line, which is used by professional chefs, baristas, and bar tenders. This distinguishes Vitamix machines from standard consumer blenders that aren’t built to the same standards, and do not last as long.

Most home food processors fall into the consumer category of using weaker parts that are more likely to break over time. If you want commercial-level quality in a food processor, consider the “Vitamix of food processors.” 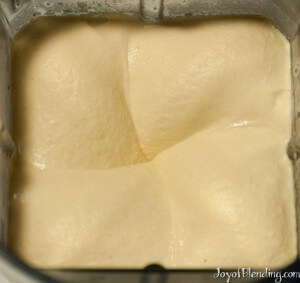 A Vitamix wins on all of the classic blending tasks, including smoothies, soups, crushed ice, and almond milk. It works more easily and gives better results. A Vitamix also does better on thick blends like nut butter, hummus, and frozen desserts. Its dominance comes from the combination of the powerful motor, the circulation vortex, and the tamper. The tamper allows you to push ingredients down without having to stop the machine, open the lid, and scrape down the sides. These features are also what make Vitamix machines better and more versatile than standard blenders.

Vitamix on par with food processor

By using lower speeds, a Vitamix can leave texture in things like salsa and pesto. A Vitamix can also grind up hard cheese cheeses like Parmesan, and make emulsions like mayonnaise.

The most common food processor task that people use Vitamix machines for is chopping vegetables. It works best for sturdy vegetables like carrots, cabbage, celery or onions. There are two main techniques.

“Dry chopping” works for smaller amounts of up to about 1 cup for narrow Vitamix containers and up to about 2.5 cups for wide containers. You just blend on a low to medium speed and add the vegetable. (The lower the speed, the bigger the pieces.) It works best if you don’t add too much at a time. It processes in seconds, so it’s easy enough to dump out a batch and move on to the next batch.

The other technique of “wet chopping” allows you to chop larger amounts. The most common use is for coleslaw. I’ve also wet chopped potatoes for latkes. You add large chunks of vegetables, and then enough water to float the chunks off the blades. The water circulates the larger amounts of vegetables past the blades and keeps them from getting stuck. After a quick blend, you drain the vegetables using a colander. You lose a little flavor and nutrients in the water, so some people save the water for broth or soup.

I know plenty of people who got rid of their food processor after buying a Vitamix, and plenty more who happily use both. It really depends on how often you do the tasks that food processors excel at. 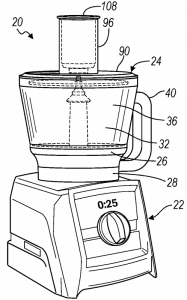 Vitamix is apparently aware that food processors are better at certain tasks, as they have filed patents for a food processor container that fits on a Vitamix base. The plans are specific enough that they’ve clearly put serious development into this, although it’s impossible to know if they will actually release it. To the right is a preview of what it may look like, taken from one of the patents.

The container looks extremely similar to a traditional food processor, with both an s-shaped chopping blade that goes in the bottom, and slicing and shredding disks that go at the top. Here is a view of a slicing disc:

Plus a chopping s-blade and shredding disc:

They also mention a spiralizer attachment in the text.

Traditional food processors use mechanical interlocks to prevent you from turning them on without the lid properly in place. Vitamix blenders don’t have those mechanisms, so the patents describe a NFC safety interlock system. (NFC is a type of close-range radio-frequency identification.) That means it would only work on their smart blenders. They also mention that NFC would allow them to tailor speeds to the different attachments.

Food processors spin considerably slower than blenders, and one of the patents details a neat solution to the speed mismatch. The container design has a planetary gear transmission system in its base, which allows it to reduce the speed from blender speed to food processor speed. Here’s a view of the planetary gear system: 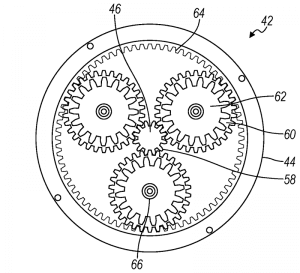 If you’re interested in the food processor attachment, you can sign up for my email updates, as I will certainly post about it if it comes out.