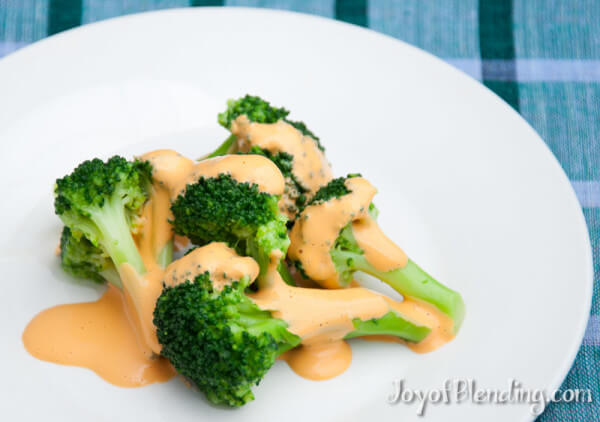 This is a versatile and tasty sauce. It can go on a variety of grains and vegetables, and it also works as a dip. The sauce is based on what Vitamix calls their “Not-So Cheese Sauce.” The flavor is savory and satisfying.

Variants of this sauce are popular among vegans, but it’s tasty enough that most cheese-eaters appreciate it. Just don’t expect it to taste exactly like a cheese sauce.

The bright color comes from the yellow nutritional yeast* and red (not spicy) pepper. Vitamix’s recipe calls for canned pimientos, but I’ve also had good results with using roasted bell peppers from a jar. You could also probably use raw red bell peppers or paprika.

I found the Vitamix recipe to be a bit overly salty and thin, so I made a few adjustments. Depending on how you want to use it, you could add even less water. I also prefer cashews over almonds for this sauce, although any mild nut should work.

Blend on high for a couple minutes until the sauce is warm and starts to steam.

A classic combination is to serve this savory cashew sauce with broccoli as shown above, but it also goes well with many other vegetables and grains. It’s a similar idea to what I described in my write-up of the Real Food Daily house dressing: you cook up some simple steamed vegetables and/or grains and then give them a boost of flavor with a savory sauce.

You can also use this sauce to make a vegan mac-and-cheese.

If you make this sauce and like it, you might want to make a double batch the next time, since it keeps well. Leftover sauce should keep in the fridge for at least 5 days, but we’ve always used it up sooner than that.