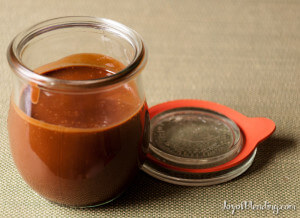 Nutella is pretty delicious, and I’ve been curious about making a version of it myself. I was wondering what it would be like fresh and without having the first two ingredients be sugar and palm oil. In case you didn’t catch it, Nutella settled a somewhat hilarious class action lawsuit last year over misleading health claims. I decided to try making a more wholesome version with just hazelnuts and chocolate, first ingredient hazelnuts. It’s quite simple to make with a Vitamix, but I took a few missteps the first two times I made it.

The first time I made it I over-roasted the hazelnuts. I found recipes that suggested roasting 10-15 minutes at 350 F, until the skins start to darken. I didn’t really notice the skins change color, so I took them out after 15 minutes. I noticed that they continued to roast out of the oven, as I could still hear them quietly hissing/sizzling for quite some time. They ended up with a slightly burnt flavor.

The second time I tried soaking the hazelnuts for 8 hours and then drying them in the oven on low (at ~120 F) for 24 hrs. That batch turned out OK, but it lacked the nice hazelnut flavor. I think some of the flavor leaches out into the water, and you also miss out on the tasty Maillard Reaction products of roasting.

The third time I roasted the nuts at 300 F and took them out after 10 minutes. This batch worked out nicely. I would recommend roasting until you start to smell the nuts. Remember that they will continue to roast a bit after you take them out. The lower temperature gives you a wider window to shoot for. I don’t think you can use a prescribed temperature and time because ovens will vary, and, perhaps more importantly, the state of the nuts will vary (more moisture would mean more roasting time).

The simplest way to make this recipe is by using sweetened chocolate, which is what I did this time; I used dark chocolate (Trader Joe’s) because I’m a dark chocolate fan, but you could also use a milk chocolate. Alternatively you can use unsweetened chocolate plus sugar (powdered sugar is ideal, since it will blend in faster; you can make powdered sugar with a high-power blender by just blending white sugar alone). You could also use cocoa plus sugar, although in that case you might want to add some additional fat (that’s why I like using bar chocolate–it includes the cocoa butter).

This recipe is for the minimum amount that will blend in the Vitamix (using either the 32-oz, 48-oz, or tall 64-oz container; the new short 64-oz containers have wider bases and require a greater volume to circulate). It would be less effort if you made a larger batch because then you wouldn’t need to stop the machine to push the mixture into the blades a few times. I decided that the extra work of stopping the machine is worth it, given that I think this should ideally be consumed within 1 week and we’re a small household.

If you’re not using sweetened chocolate, I would start with 1 oz unsweetened chocolate plus 3 tablespoons of sugar (ideally powdered, though not necessary), and then add more chocolate or sugar to taste. If you use cocoa instead of baking chocolate, start with 3 tablespoons of cocoa, plus a tablespoon of fat; a few possibilities: canola oil, hazelnut oil, butter, or coconut oil (coconut would make it harder at low temperatures). If you want to end up with a thinner consistency you can add some milk or a light oil like canola. With just the hazelnuts and chocolate, this recipe ends up similar consistency to butter: solidified, but not too hard at fridge temperature. 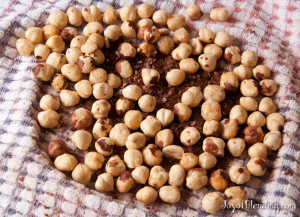 Roast the hazelnuts at 300 F, stir them after ~5 minutes, and remove them after ~10 minutes, once they’ve started to become fragrant. Be careful about over-roasting and remember that they will continue to roast a bit after you take them out. Remove the skins by putting the hazelnuts in a clean dish towel and rubbing them around. Most likely not all of the skins will come off easily, but it’s fine to leave some on. If you have time, let them cool. Then blend at max speed.

First the nuts will turn into a flour, and the flour will fly away from the blades and start to stick to the corners of the container. Try to push it down with the tamper, although if you’re blending just 1 cup the tamper will have trouble reaching. So stop the machine and scrape the flour off the edges and out of the bottom corners with a spatula or chopstick. Turn it back on and blend again; you may have to repeat this cycle a few times. (If you want to make this easier, you could make a double batch and then the tamper would be able to reach much better and you probably wouldn’t have to stop it.) Keep going until you start to get a paste. Then add the chocolate. The chocolate will bounce around at first, but keep going and it will melt from the heat of blending, and it will help get the hazelnut paste circulating. You may want to stop again to scrape down the sides. Eventually you’ll end up with a liquid circulating. You can taste it and decide if you want to add more chocolate.

Pour into a container for storage in the refrigerator. It will partially solidify once it cools, though it remains spreadable even at fridge temperature.

Enjoy it on toast, fruit, or just off a spoon! We also had it with some Trader Joe’s mini freezer croissants, which was pretty divine.