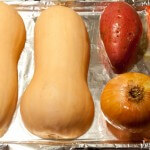 Cold weather is upon us, so it’s a good time to make some hot soup in the Vitamix. I decided to make a simple butternut squash soup, which is something that I’ve always meant to do. I’ve seen online raw recipes that I was curious about, but when it came down to it, the smell of the raw squash when I cut it open was not particularly appealing. I’ve always liked roasted vegetables, so I decided to go that route. I just roasted the squash and some other vegetables, and then blended them with coconut milk and some spices. It worked quite nicely.

Preheat oven to 400°F. Cut the squash in half and scoop out the seeds. You can save them to roast/toast separately if you like. Poke a few holes in the yam. I coated the carrots and yam with a bit of olive oil. The onion I left whole, which was the one thing I regretted. It didn’t roast as much as I would have liked, so next time I will use something smaller, such as a few shallots, or cut the onion in half. Also, you want to use pretty fat carrots, or else you should put them in midway through the roasting. I put the garlic in halfway through because I didn’t want it to burn.

Spread the vegetables out on an oven pan (I used foil to minimize cleanup).

Add the cumin and coconut milk to the blender pitcher. I didn’t add too much cumin because I didn’t want to overpower the soup. I probably could have added more.

Let the roasted vegetables cool for a bit (~10-15 min) so that you can scoop the squash out of its skin without burning yourself. Peel off the onion and garlic skins. I also peeled off most of the yam skin, which is probably not necessary, but I wanted to maximize smoothness. Blend it up, and prepare yourself for a tasty creamy soup.

We found it pleasantly rich. When looking at other people’s take on butternut squash I came across this chef who’s rule of thumb is 1 lb butter per 1 pound squash! That’s about 50 times more fat per squash as I used; to each his own!