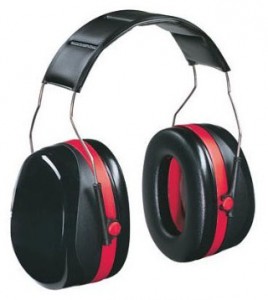 Blenders are loud, and powerful ones like the Vitamix and Blendtec can be even louder. Commercial establishments often use sound enclosures, but I haven’t come across a reasonable enclosure for home use (they’re bulky and expensive).

Instead, I’ve been happy with a set of earmuffs that I bought a few years ago. They may look like overkill at first, but they make blending much more pleasant, and they just might save your hearing. If there are often other people nearby, you might even want to get a second pair (the typical alternative is that everyone else runs for cover while the blender is going.)

Now that I have the earmuffs, I use them for other tasks as well, such as vacuuming, weed-whacking, or trying to concentrate when there’s some sort of ruckus going on nearby.

The latest generation of Vitamix machines are reportedly quieter, but I would still wear ear protection. Even if the engineers were to figure out a way to perfectly muffle the motor, there would still be the noise of your ingredients being chopped and bashed around at extremely high speed.