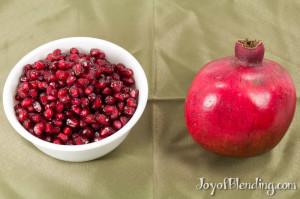 Pomegranates are awesome, but I’ve only recently started putting them in smoothies. Previously I was afraid that their seeds wouldn’t blend smooth enough, and it always felt like a major undertaking to deseed them. It turns out that with a high-performance blender you can blend the seeds pretty smooth. There will still be some detectable texture, but I think it’s perfectly palatable. I recently came across a different deseeding technique that makes it go significantly faster. The flavor of pomegranate can really brighten up a smoothie.

One trick is to add a little extra ice and run the blender for longer to get a smoother texture. If you are making a smoothie with a lot of other ingredients, you can give the pomegranate seeds a head-start by blending them for ~30 seconds along with some ice cubes (so they stay cool) before adding the rest of your ingredients.

To deseed the pomegranate I like to use the “whacking” technique. I came across it on YouTube last winter—there are a bunch of videos featuring it, and I don’t remember which one I saw first. The most memorable to me is the Martha Stewart one, although she does it a bit differently from what I’ve been doing. Some of the videos claim that you can get the seeds out in 10 seconds, but that’s a lie. I like to get out every last kernel, which typically takes me a few minutes start-to-finish, but that’s generally much faster than the time the other methods* have taken me. I decided to make my own video, and I tried to keep it short and to the point. I also tried to show how long it takes, by showing the full process on the first half, and then showing the second half sped up. Here’s my video:

This method does break some of the kernels, but most of them stay intact, and if you’re making a smoothie, it doesn’t matter if some get crushed. I’ve found that splatter isn’t usually a problem, although occasionally a few drops squirt out. I haven’t had any staining problems, but it would probably be best not to do this near stainable things like light-colored clothes.

Here’s a simple recipe for a pomegranate smoothie:

Blend on high for a bit longer than you normally would: try 60–90 seconds. 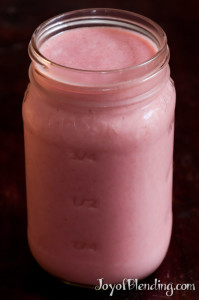 Update: I have a new savory pomegranate smoothie recipe.

Pomegranates are in peak season, so now’s the time to give them a try! The kernels freeze well (at least for smoothies), so if you find a deal on pomegranates you can stock up, deseed them, and then save frozen kernels for future months.

*I’ve tried the bowl-of-water method, as well as the individual-section-cutting method.