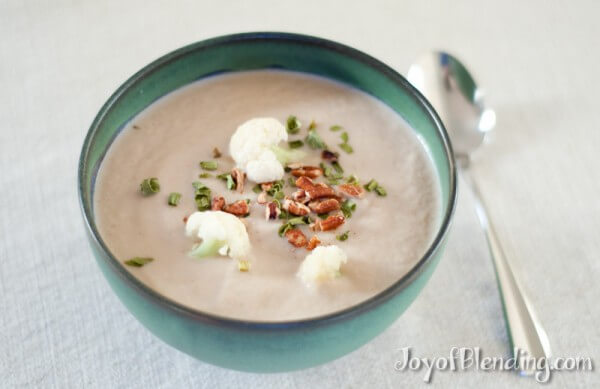 This soup is conceptually similar to the broccoli and asparagus soups that I wrote about last year, but the the cauliflower and mushrooms give it a totally different flavor. The general idea is cook some vegetables, blend them with some liquid, and then serve with a little garnish. I steamed the vegetables, but you could also saute or roast them. I kept the flavor simple by not adding any extra stock. It’s a sort of vegan cream of mushroom soup. 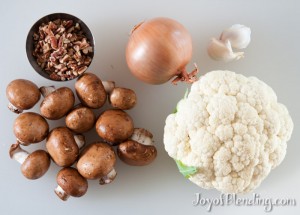 Start two cups of water boiling in a pot with steamer inserts. I have one like this that has two levels, which is handy. If you don’t have a steamer, you could just use a pot and put the vegetables straight into the water since you will be blending the cooking liquid into the soup anyway. Peel and coarsely chop the onion and garlic and add to the bottom steamer. Wash the mushrooms and cauliflower. Break up the cauliflower head into florets and add them to the top level of the steamer once the onion and garlic have been going for about 6 minutes. Wait about 2 minutes, then add the mushrooms and steam for another 4 minutes. These steaming times are not exact, and at the end you should check the cauliflower to make sure it is cooked. Here’s a schematic of my suggested steaming times:

Once the vegetables are cooked, transfer them to your Vitamix or Blendtec pitcher. If you like you can set some aside for garnish. Measure the remaining steaming water, and top it off to 2 cups to make up whatever water boiled off during steaming, and add it to the pitcher. Then add the nuts, salt and pepper (I used 10 whole peppercorns). Make sure the lid is on tight, start on low speed, and ramp up to high and blend until smooth.

Garnish with some vegetables, nuts, and chives.

Part of the reason that it’s been a while since I posted a new recipe is that the first time I made this soup I tried a new technique that was a total failure. I had an idea that I would blend the vegetables raw, and then cook them. The raw blended onions and cauliflower had an extreme smell that never went away even after 20-30 minutes of simmering. It tasted so bad that we had to dump most of it down the drain, and the whole house stank for a couple days. I don’t know the exact chemistry, but I suspect that blending them raw leads to some oxidation products that taste bad and are not improved with cooking.

* I used brown button mushrooms, but you could really use any type of mushrooms.
** Other nuts like cashews or almonds would be also be fine. You could of course also add some butter or cream if you don’t care about keeping it vegan.
*** I used dry chives. ↑